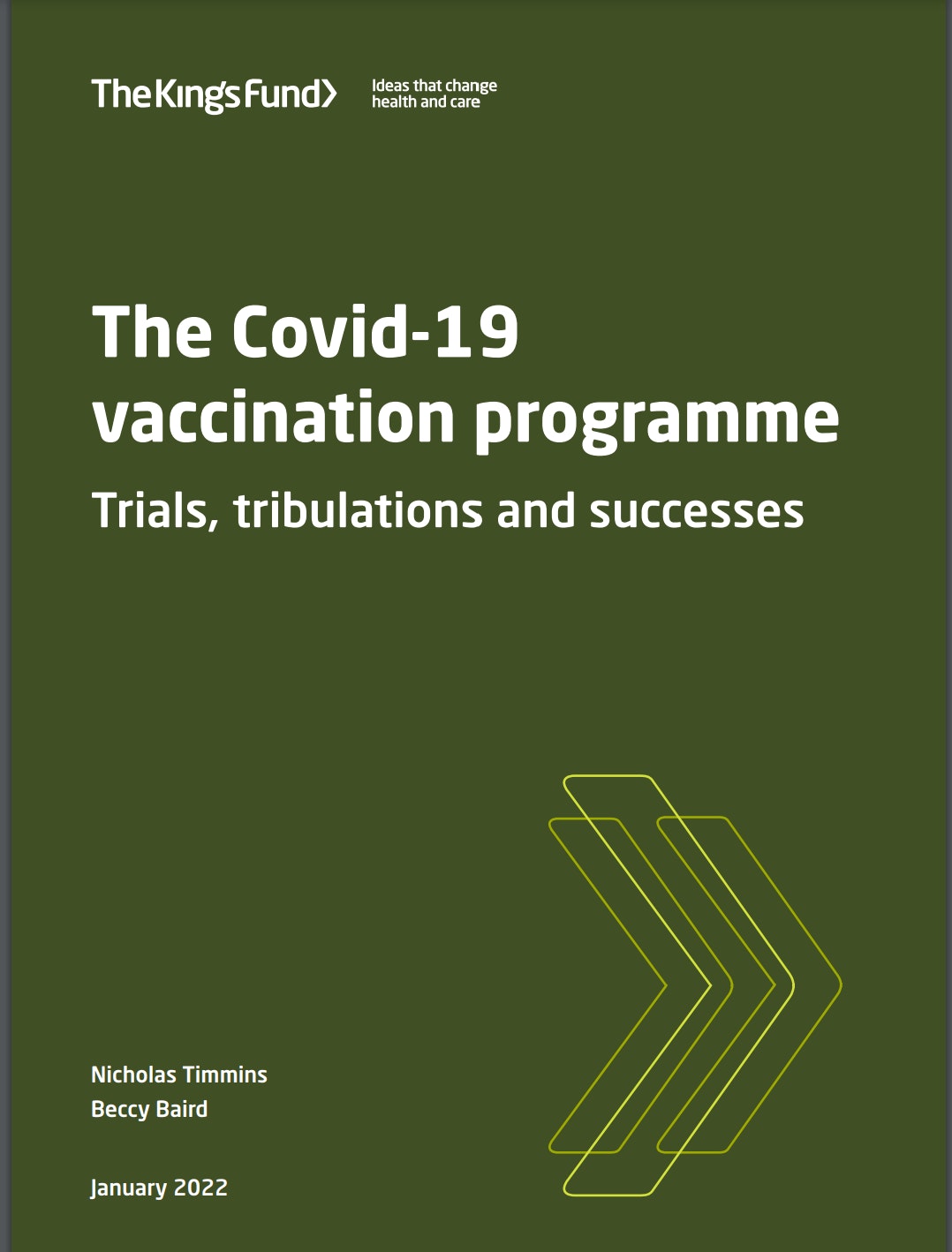 Summary of The King's Fund report

• The Covid-19 vaccination programme has been one of the few almost unqualified successes of the UK’s response to the pandemic.

• Based on interviews with a wide range of people involved in the programme, this report sets out what the roll-out in England has achieved, as well as its trials and tribulations. Given that the pandemic is ongoing, the report takes its cut-off point as end of November 2021 (with a brief update to reflect the changed situation due to the Omicron variant).

• The authors of this report wanted to find out whether certain aspects could be ‘bottled and reused’ to improve other areas of NHS service and delivery.

• The authors found that data played an important role. The NHS has never used so much data so quickly and so powerfully, supporting the delivery of vaccine doses, recording any adverse reactions and, most importantly, allowing NHS staff to map who had the vaccine.

• System-working, joining up the NHS, local government and the voluntary sector was a hallmark of the vaccine roll-out. Local knowledge and delivery were crucial.

• Volunteers played a vital role, not just in acting as stewards at vaccination sites, but also in terms of community outreach, for example with faith communities and others offering sites for vaccination which in turn built trust in the vaccine and in the NHS.

• These factors which helped make the roll out a success should be ‘bottled and re-used for other NHS services, from childhood immunisations to screening for cancer, diabetes, high blood pressure and other conditions, improving the service’s ability to reach the harder to reach.

Background
On 8 December 2020, in University Hospital, Coventry, Margaret Keenan became the first person in the world (outside of a clinical trial) to receive a vaccine to protect against Covid. Within two days, in more than 50 hospitals across the UK, more than 15,000 people were inoculated, getting the UK’s Covid-19 vaccination programme well under way. At its peak, more than 4,000 accredited vaccination sites were operating across 7 regions of the NHS and 153 local authorities.

Given the speed with which the vaccine had initially to be rolled out, it was a near miracle of planning and execution. The vaccines being used (Pfizer BioNTech, AstraZeneca and Moderna) provided high protection against hospitalisation and death. As at September 2021, the UK Health Security Agency estimated that the vaccines had prevented more than 24 million infections and more than 105,000 deaths. By November 2021, the vast majority of Covid patients admitted to intensive care units were those who had not been fully vaccinated.

Findings
The success of the programme rested on a huge number of organisations and individuals collaborating rapidly and effectively, accessing the right expertise at the right time. Primary care networks (PCNs) proved invaluable. They could operate at sufficient scale to meet the requirements for the Pfizer vaccine (with its 975 delivery doses and limited shelf-life once defrosted).

The programme’s aim was that everyone should have equal access to the vaccine when it was their turn to be vaccinated, and within 10 miles of their home. To do this, it opted for three delivery routes: hospitals, mass vaccination centres and GP‑run vaccination centres.

Although all concerned wanted to make the fastest possible progress, those leading the programme knew that targets had to be ambitious but also achievable. The involvement of the armed forces (through 101 Logistic Brigade) helped ensure that key targets were met. By 15 February 2021, everyone in the four top priority groups had been offered a vaccine, with 13 million doses administered.

Other findings on specific areas include the following

• Data: The NHS has never used so much data so powerfully – and so fast – to operationalise a programme. Supplies of vaccines and kit and equipment needed to be managed in real time, so that those leading the roll-out knew which places were lagging, which groups were proving harder to reach, which areas needed to put more effort into building trust, and where new sites were needed.

GP practices had to learn (almost overnight) to use a new system, Pinnacle, as the ‘point-of-care’ solution. The national booking system was implemented smoothly on the whole and worked with relatively few glitches, and the NHS app came into its own. Foundry, a data integration system that had been used earlier for the ventilator programme and tracking personal protective equipment (PPE) supplies,
provided a ‘single source of truth’ about programme delivery that proved to be a powerful tool for decision-making.

• Outreach: The development of a vaccine equity tool allowed the programme to see how it was doing, not just nationally or regionally but down to a very local level. That meant the programme could quickly identify gaps in provision that could be plugged by additional sites. Community and faith leaders got involved as volunteers, offering their venues as vaccination sites and reaching out (often literally, going door-to-door) to encourage local people to get vaccinated.

• System-working: The roll-out was so successful because across so many parts of the country, the NHS and local government worked hand-in-glove – the NHS providing the vaccine, local government harnessing community champions to help build trust in it, providing additional sites, and much else. Not only has this collaboration and relationship-building proved vital for the roll-out, it has strengthened the foundations for the place-based partnerships between the NHS and local government that are core to creation of integrated care systems.

• Volunteers: From the armed forces to St John Ambulance and the many thousand members of the public who signed up as NHS volunteers, the programme has shown ‘the convening power of the NHS’. Some 80,000 additional vaccinators were trained, 30,000 by St John Ambulance. Harnessing volunteers on the scale achieved by the programme is something that could be utilised in other areas in future.

• Remaining challenges: The few qualifications about the programme’s success include lower uptake among ethnic minority groups (despite substantial efforts to reach them), and difficulty persuading some of the younger cohorts to get the vaccine, to protect others as well as themselves. Uptake also continues to be lower in more deprived areas. Indeed, in some areas of the country, and among some age groups, many people have still not received even a first dose of vaccine, for a range of reasons.

Conclusions
The programme roll-out benefited from strong leadership at all levels. The central operation built ‘a team of teams’. Few public programmes have involved so many interlocking parts where, if any one of them failed, the whole programme would have slowed and could even have stalled. As well as the NHS centrally, directors of public health played a major role, despite having been overlooked by central government on other key aspects of the response (such as Test and Trace). Alongside them, many NHS managers and hospital staff, GPs and general practice staff, and pharmacists all seized the opportunity to work together effectively and to innovate. Private sector companies also played their part, putting aside their competitive instincts to help make the roll-out work, delivering early on in relation to IT and logistics in particular.

The mantra that the programme should be both simple and fair was crucial throughout – making it as easy as possible for people to get vaccinated, while working hard to reach those least in touch with health care services and who were least trusting both of government and of the vaccine.

Interviewees highlighted that it is not enough for the NHS to offer a universal service, it also has to offer equal access, taking services to places and people who have least contact with those services.

Finally, perhaps the key lesson from the vaccination programme is that the factors that made the roll-out a success can be applied to many other parts of the NHS’s service. High quality use of data, and particularly mapping data, to establish where take up is high or low, close working, very locally, between the NHS and local government and the voluntary sector to take services to places that the NHS would not normally reach, with that helping build trust in the services that the NHS does provide. That can be applied not just to other vaccine programmes such as childhood immunisations, but to screening for cancer, diabetes, high blood pressure and other conditions.