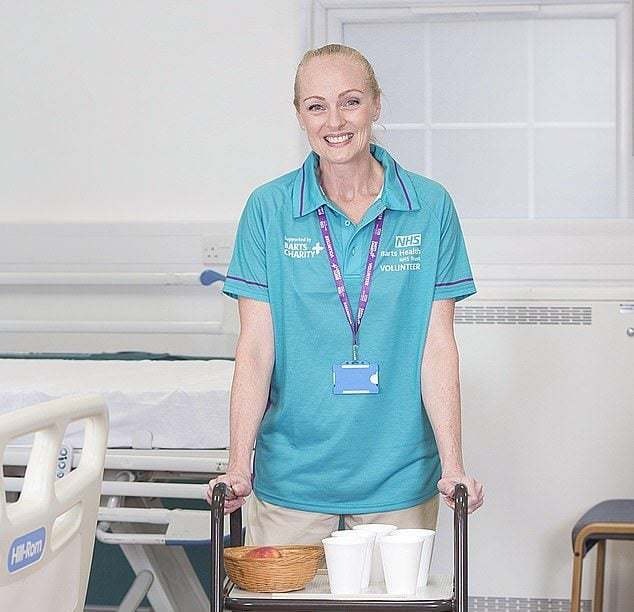 When I was a teenager I wanted to be a nurse but instead I spent most of my career in London’s West End, performing in musicals such as Chicago and My Fair Lady. Four years ago, I gave that up to become a flight attendant, which I absolutely love, but I often have long breaks between flights.

As an Australian living in the UK for 27 years, I have a great deal of admiration for the NHS and I’d been thinking of doing something like this for about five years, but never got round to it. Then, when I read about the campaign in the Mail, it spurred me to act.

My role is to take refreshments round on a trolley — similar to my day job — and chat to patients. I mainly work in A&E and a ward for older ladies. Being an ex-performer I’m not afraid to just strike up a conversation — asking someone if they’d like a nice cup of tea is a real icebreaker.

I try to be a friendly face at a time when a patient may be feeling nervous. I have to check with the nurses to see who can have a drink or food and who can’t, but I can help with opening packets and clearing away trays.

I find it rewarding to make someone smile who had been looking sad. There are lots of people like me out there who want to do simple acts of kindness and don’t know where to start — Helpforce is perfect, as they can do as much or as little as they are able to.

One week I might just do a couple of hours, another week three four or five-hour shifts, if I want. It’s nice to feel part of the NHS community — the nurses are glad of the help. When you do something out of love for free, it is so fulfilling.

Read the full article in the Daily Mail